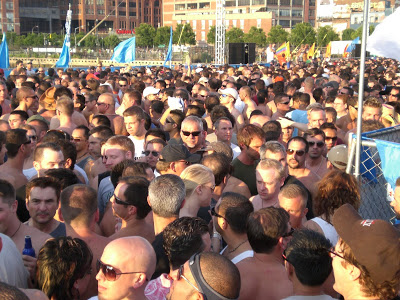 This year’s Pier Dance was a fantastic (if occasionally gruelling) exercise in trying to stay with your friends, as the crush of 5000 men continuously attempts to separate you. It was like being in that episode of Star Trek when they visit the planet where nobody ever dies. Definitely not for the claustrophobic. Still, I managed to hang onto the Farmboyz and the Thruple for the entire event, a first time victory for me.

DJs Larry Needham and Jonathan Porter totally knocked it out of the park, providing a lovely melange of (screaming diva-free) breezy, jazzy house and disco classics. Highlights: How Could I Love You More – M People, Everytime I Close My Eyes – Lustral, Red Letter Day – Pet Shop Boys, and my favorite 90’s trance hit, Madagascar’s You’re Beautiful. That song has tremendous emotional resonance for me as it was the late DJ Neil Lewis’ trademark song for my circle of friends. It wrecked me even before Neil died, now much more so. It was dark when You’re Beautiful was played, rendering some cover for my tears. The gay cheerleaders did a tumbling/acrobatics show around twilight, following a couple of hours later by headliner Idina Menzel, the Tony Award winning lead of Wicked. Nobody around us seemed to know who she was, although when I explained that she was married to Taye Diggs, that got their attention and they began scanning the crowd around the stage to see if he’d accompanied her. No such luck, apparently. Menzel delivered a rather rote two-song set, with little banter to the audience. The dance mix of Wicked’s first act closer, Defying Gravity, was actually OK, especially considering the grievous track record of discofied showtunes.

The evening closed with Heritage of Pride’s annual fireworks display over the Hudson River, fired from a barge just off the pier. To the accompaniment of Aaron Copeland’s Fanfare For The Common Man and the Beatles’ All You Need Is Love, thousands of gay men pulled their lovers and friends into tight, swaying groups. To crib from last year’s Pier Dance post, “The fireworks began and we turned to face the Hudson, arms around each other, our faces illuminated by the rockets in the sky and the love we have for each other.” Thanks again to all my friends for entirely perfect day. While I realize that five minutes of fireworks may not make the most compelling video, it will hold sentimental value to those who attended. And watch for the Farmboyz having a romantic moment a couple of minutes in.