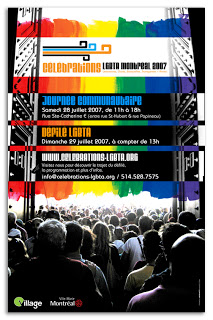 Montreal Pride Back On Montreal’s Pride parade is back on, rescued by a new community group called Celebrations LGBTA Montreal. (The “A” in their LGBTA stands for “amis”.) Montreal Pride is now scheduled for July 28th & 29th. In May, Divers/Cité (the group that has put on the parade in the past) backed out, citing wishes to focus on their gay cultural festival which takes place in August.

Divers/Cité ran their first parade in 1993, with only 5000 attendees, growing attendance to over 1.2 million by 2003. However, in recent years Divers/Cité has faced increasing discord among participating merchants and decided this year to drop their most expensive event, the parade.

Those critical of the commercialization of Pride events, the corporate logos, the greasy food arcades, etc., should note that many (if not most) Pride organizations struggle mightily to stay afloat from year to year. As we marvel at the exploding size of the events and the crowds, we should be mindful that as the attendance grows, so do the costs: security, permits, and insurance. The list of major Pride events that almost didn’t happen this year (Seattle, Montreal, etc.) serves as a sobering reminder that like freedom, Pride isn’t free.