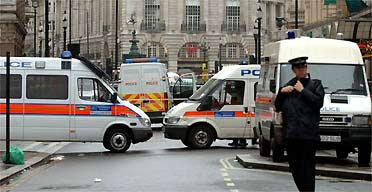 The day before London Pride, today British police were tipped off about a suspicious car parked on Haymarket Street (in London’s West End) along the route of the gay Pride parade. Inside a Mercedes they found gas containers and a large number of nails, unnerving Londoners who plan to attend tomorrow’s event. Police described the bomb as similar to those used by Iraqi insurgents. The bomb was defused and the area cordoned off, with nearby subway stations closed.

The car was first came to the attention of ambulance workers at 1am, when they noticed it filling with smoke as they treated an ill patron of the nearby Tiger Tiger nightclub. Witnesses say they had noticed the car being driven erratically before it crashed into garbage cans, with the driver escaping on foot.

In 1999, a nail bomb exploded in the Admiral Duncan Pub, a gay bar, killing three and injuring 73. Even more worrying, next week is the second anniversary of London’s July 7th bus and subway bombing which killed 52. As they scour the city for more suspicious vehicles, London police are making no speculations that the car bomb may have been intended for tomorrow’s massive gay pride crowds that will pack nearby Picadilly Circus.