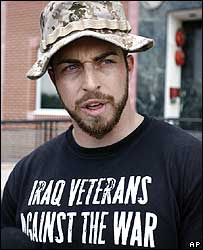 Cpl. Adam Kokesh, Iraq vet, anti-war activist, UMSC reservist, and AMERICAN HERO, lost his case before the Marine Corps today as a three-member panel recommended that he be involuntarily released from the Individual Ready Reserves and have his honorable discharge from the Marine Corps downgraded to a “general”, or less-than-honorable discharge. Kokesh was brought up on charges that he had dishonored his uniform by wearing a “stripped-down” version of it to anti-Iraq war protests.

A general discharge means that Kokesh will get to keep his GI benefits, which a dishonorable discharge would have ended. The separation from the Individual Ready Reserves is largely symbolic, as Kokesh was scheduled to complete his committment on June 18th.

Kokesh’s lawyer said, “What that means is he is not dishonorable, and he’s only kind of honorable, so in effect, the board picked the safe route.” Kokesh vowed to appeal the ruling, saying, “I’m standing on principle and we’re going to contest this on principle. It’s not going to go away. It’s clear these tactics of intimidation are being used against members of Iraq Veterans Against the War. Freedom of speech means the right to say what other people don’t want to hear.”

On Sunday, Kokesh appeared on Good Morning America with two other Iraq vets charged for their anti-war activities:

The Iraq Veterans Against The War are spinning today’s ruling as a victory, since Kokesh did not receive the severest punishment available. Please leave your messages of support for Adam Kokesh at his blog, where right wingers have been leaving hate messages, including calling Kokesh a “faggot” for his anti-war views.
.