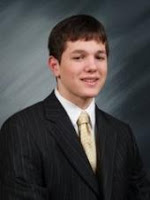 “Who I’d like to meet: Any conservative college student in the DC area who is interested in fighting the left” – From the MySpace page of 18-year old Tyler Whitney, the webmaster for rabidly homophobic Republican presidential candidate Rep. Tom Tancredo (R-CO). Whitney was outed this week by Michigan gay newspaper Between The Lines.

Whitney is also affiliated with the hate group Young Americans For Freedom and was pictured with a sign that said “Go Back In The Closet” as he protested against a proposed comprehensive human rights ordinance in the city of Lansing (which later passed). Whitney was handpicked to run his campus chapter of YAF by MSU chapter leader Kyle Bristow, who has appeared on the O’Reilly Factor, and has been quoted as saying that gays are deviants who deserve to be in prison and that if he had a gay son, he would kill him.
As a commenter here said recently, I believe that children are our future, unless we stop them. Still, I feel sorry for this kid and the fucked up road he has started upon.
(via – Michelangelo Signorile.)
UPDATE: Tyler Whitney has updated his MySpace page, removing the hateful language and his “straight” orientation.
Share