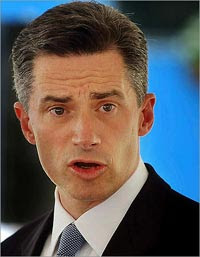 “It’s more her awful appearance in an inappropriate and ill-fitting ballgown with a plunging neckline.” – Former NJ Governor Jim McGreevey, blaming his estranged wife’s attire on Oprah for her book’s poor performance, rather than his having charged her with being homophobic. In addition to dissing her fashion sense, he said her book is “dull” and “poorly written”. Meow!

Previous The End Of Wizzy
Next Hairspray Boycott Gains Visibility