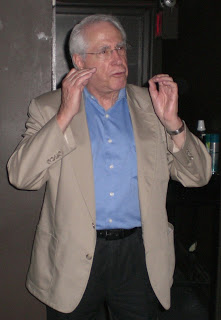 Gravel Speaks To The Gays Last night I attended the Queerty-sponsored speech of presidential candidate Sen. Mike Gravel at the Hotel Chelsea’s Star Lounge. While Gravel spoke passionately about ending “Don’t Ask, Don’t Tell” and marriage equality, he made a couple of missteps. First, when expounding on his position that closeted gays hurt the cause, which all here agree, I’m sure, he said, “Be proud of who you are, whether you’re gay or lesbian or transvestitite!” Uh, “transvestitite”, Senator? That caused a few rolled eyes.

Then during the Q&A, I asked, “Senator, what do think the chances are of getting ENDA passed during the current session?” Gravel responded that he had no idea what ENDA was. I gave a brief description of ENDA and he said he supported it, “of course”. Gravel left the Senate in 1981, so I suppose he can’t be expected to be current on all pending legislation, but I found his ignorance on ENDA to be rather unforgivable, particularly when he’d been invited to speak to gay activists.

The event was well-attended and I congratulate the Queerty guys, David Hauslaib and Andrew Belonsky, for to putting it all together.