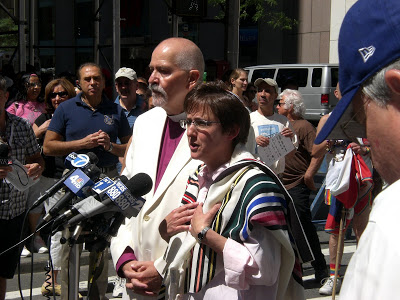 On Sunday I started my day at the Heritage of Pride press tent for the news conference with this year’s grand marshalls: Rev. Troy Perry and Rabbi Sharon Kleinbaum. Facing an army of news cameras, they both spoke eloquently about gay rights and religious tolerance. At least, I presume they did, I couldn’t hear a dang thing, despite being less than 10 feet away, thanks to the noise of passersby. At one point a reporter leaned over to me and asked, “What was that last thing she said?” I shrugged, “Something about aardvarks?” I did get to meet them both briefly afterwards and they were very gracious, but I didn’t ask them to rehash their words.

Hours later, after the 20th or so religious group had passed us in the parade, I wondered aloud why there was no atheist contingent. What would our signs say? Would we be allowed to march in the religion section? What would our chant be? And more importantly, what about outfits? Suggestions appreciated.

Previous HRC Launches Blog
Next Towleroad: The “It” Blog