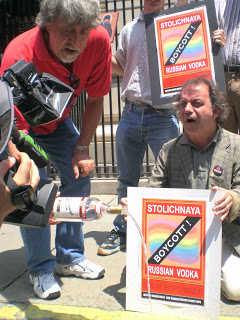 With Russian news cameras rolling, rainbow flag creator Gilbert Baker and gay activist Brendan Fay poured Stolichnaya vodka into the street in front of New York City’s Russian consulate in protest of the treatment of Russian gays by their government.

Under the wary eye of the NYPD (who did NOT want to be photographed) and U.S. State Department operatives (the earpieces are a dead giveaway), a small group of protesters marched on the sidewalk with placards. Brendan Fay attempted to deliver a letter of complaint to the consulate staff, but they did not come to the door. I spoke briefly with the Russian news team, who seemed sympathetic to the cause and promised that their story will run on Russian satellite news later today. I will provide a link to their online streaming account of the event when it becomes available. Russian nationals waiting at the consulate were generally friendly, with one woman commenting that she worries for the safety of her gay cousin in St. Petersburg.

RELATED: SPI International, the Russian spirits manufacturer that has owned the rights to make and distribute Stoli since 1992, won an 18-month court battle against the Russian government in the U.S. District Court of Southern New York in April 2007, granting it the right to the trademark in the United States. Pernod Ricard, the international distributor of Stoli, acquired the brand last year when it bought Allied Domecq, a former co-defendant in SPI’s case. When Russia stripped SPI’s right to bottle and sell Stoli from Russian soil in 2002, SPI moved manufacturing to Latvia, despite continuing to label Stoli as “authentically Russian vodka”. Pernod Ricard maintains the the vodka is merely bottled in Latvia and is shipped there in bulk from Russian distilleries, although that claim is disputed. The Russian state-owned import-export agency Soyuzplodimport continues to maintain that they alone hold the right to manufacture and sell Stoli, which is the 3rd largest selling vodka in America, with annual sales of $400 million.

UPDATE: Today’s action at the Russian consulate is being criticized by some activists, who maintain that as a private (for now) brand that strongly supports gay events and causes, Stoli is not a correct target for a boycott. While I only heard of this boycott today, my understanding thus far is that Stoli was chosen due to its being the most widely-known Russian brand is the world, with the hope that the mainstream media would finally take notice of the plight of Russian gays. If the organizers of today’s action would care to elaborate on Stoli’s selection, I’ll post their explanation here.