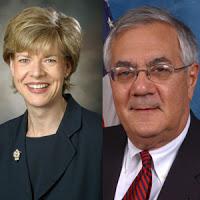 Openly gay reps Tammy Baldwin and Barney Frank have written to Secretary of State Condoleeza Rice, demanding an inquiry into the abuse and murder of LGBT people in Iraq. The full text of the letter is here.

Islamic militias continue to abuct Iraqis suspected of being gay, often leaving their battered corpses for their families to find. In April, the Iraqi government spokesman softened his government’s previous position that the murder of gays should not be included in UN death tolls, as they were “less than human”.

The problem continues unabated in Iran as well. In July last year, I covered a protest of these murders at the Iran Mission in NYC. A website exists to accept donations to assist LGBT people attempting to escape Iraq.

Previous Trevor Project Gala: June 25th
Next “I Got A Crush On Obama”