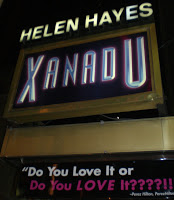 Last night Little David and I attended a preview of Xanadu, joining an audience that seemed to be 50% gay men. When the house lights went down, a roar of anticipation went up. David said, “Rowdy crowd!” And they were not disappointed.

Thanks to brilliant book by Douglas Carter Beane (The Little Dog Laughed), a show that could have been a dreary Electric Light Orchestra jukebox musical is instead hilariously clever. Lead by Kerry Butler, who channels Olivia Newton-John with a loving wink, and James Carpinello, who David describes as “totally sponge-worthy”, Xanadu has one of the strongest ensemble casts I’ve ever seen. It is also, easily, the gayest not-about-the-gays show I’ve seen.

The show runs without an intermission, with fourteen songs including two ELO hits that weren’t in the movie version and ONJ’s own Have You Never Been Mellow. (No, really, and it totally works.) Mary Testa and Jackie Hoffman (love, love her) continuously steal the show as evil muses. And forget about the fourth wall, this show knows who’s buying tickets. When an evil muse describes the action as “children’s theatre for 40-year old gay men”, the audience went wild.

As you can see from the photo below, the stage is rather simple, necessary perhaps, because the Helen Hayes is one of Broadway’s smallest houses. A few lucky audience members even get to sit ON the stage. I won’t give away any more of the show and you should read David’s review to get a proper theatre queen’s take. I am still in training for that title, but Xanadu has pushed me much closer to graduation. Highly recommended.