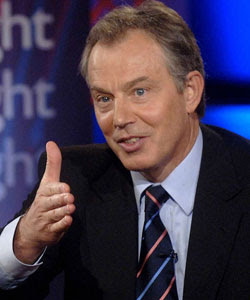 A decade after taking over as British Prime Minister, Tony Blair steps down on June 27th. Widely credited for helping move Britain away from socialism towards a vibrant, pro-market economy, Blair instituted welfare reforms, tripled the funding for the national health service, and brokered a truce with the IRA. Today Britain has the world’s 5th largest economy and the pound is at its strongest in more than 10 years.

British gays will remember Tony Blair fondly as the man who vigorously and enthusiastically supported gay rights, enacting a national LGBT civil rights law, a civil partnerships law, and a sexual offenders law that treats gays the same as straights. Blair has said that his successes in gay rights are among his proudest achievements.

However, Blair is also known as a lackey of the United States and his decision to support Bush in the Iraq invasion may well be his most lasting legacy. Blair is also the subject of a current criminal investigation regarding “cash for honors”, the expression for selling knighthoods and seats in the House of Lords.

Chancellor of the Exchequer Gordon Brown, is considered to be the strongest candidate to replace Blair. If he is named leader of the Labour Party, which is very likely, he will then meet with the queen to be named Prime Minister. Brown wants to distance himself from the Bush administration and has pledged to reduce the number of British troops in Iraq.