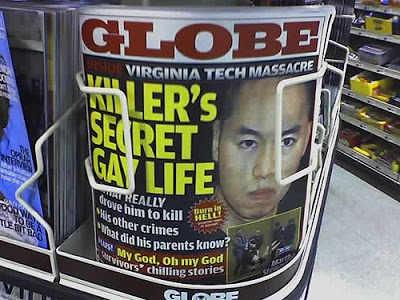 Supermarket tabloid Globe laid this big fat lie on dumbass shoppers this week. Of course, there is absolutely no evidence that the Virginia Tech shooter was gay. While I’m certain that nobody here buys or believes anything that rags like Globe say, remember that these tabs are consumed by the millions every week. As occasional JMG commenter Steph Mineart puts it, “How many people will die because of this headline?” Globe is published by NYC-based American Media, who also publishes mainstream titles like Shape, Men’s Fitness, and Muscle And Fitness, titles that you probably do read. Barrie Gordon is the publicist for American Media. Express your outrage to Gordon: [email protected]. Isn’t this a job for GLAAD, besides giving awards to celebrities?