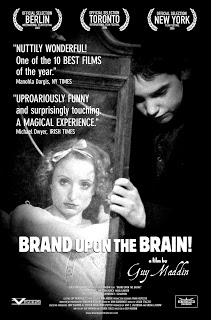 Justin Bond narrates the 3PM performance this Sunday, other performances feature such superstars as Isabella Rosellini, Lou Reed, and Laurie Anderson. Brand Upon The Brain plays at the newly restored Village East Cinemas and tickets are available here. After leaving NYC, the film (which already been featured at several major film festivals) will tour other cities.

The New York Times: “Guy Maddin’s latest astonishment– has ransacked film history and his own delirious imagination to create a work like none other: a silently shot film about a man who, on revisiting his childhood home, hurtles unto a past where orphan children, coy lesbian lovers, and a mad scientist converge.”

If you do not live in the NYC area, feel free to enter anyway as the prize is transferable to your nears and dears here in Gotham. (Hey, you could impress that BMB hottie you’ve been chasing with your downtown scenester cred.) Enter by commenting on this post, only your first comment counts and as always the winner will be chosen by the Oracle of Randomocity. Publicists: If you’d like to participate in Swag Tuesday on JMG, email me.