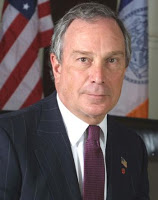 As the leading Republican candidates continue to trip over themselves in a fight to the bottom, NYC Mayor Michael Bloomberg has quietly relaunched the site he used in his last two mayoral campaigns. Term limits means that Bloomberg cannot be NYC mayor again. When asked if he plans on running for president, he usually waffles between “no” and “not likely”. A section on his site contains links to news stories that speculate on his candidacy.