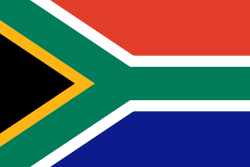 The South African government has released a list of 17 churches that have had their applications to perform gay marriages approved. The churches are all outside of the major denominations. The Anglican, Baptist, Presbyterian and Catholic churches have barred their clergy from performing the ceremonies, which were legalized last November, but some churches are considering leaving their denominations for ones more gay-friendly. When South Africa approved gay marriage, I recall Jon Stewart reporting the story, saying, “Just to reiterate, America is now less progressive than South Africa.”