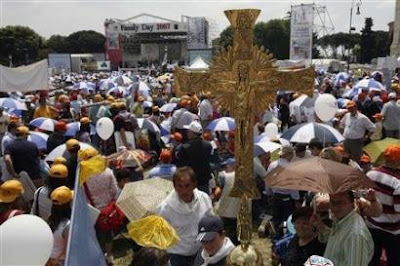 Several hundred thousand Italians protested proposed gay rights laws in Rome on Saturday, in a giant rally called “Family Day.” The rally was organized by a consortium of Catholic groups and was attended by many nuns and priests. The new law would give expanded rights to gay and unmarried couples in matters like welfare and inheritance rights, but does not offer same-sex marriage rights. The Pope sent the demonstrators a message of support from Brazil, where he is touring the bathhouses of São Paulo.

Previous Morning View – From The Rock
Next Mommy’s Boys