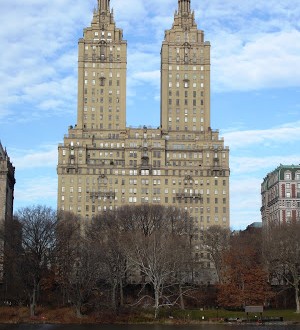 Built by Hungarian-born Emory Roth, who gave Manhattan dozens of landmarks (the Beresford, the Eldorado, the St. Moritz, and about half of downtown and midtown), the San Remo apartment building went up in 1932. Originally each unit contained an average of eight rooms and 3000 sq. feet but the units were later subdivided. The apartments sell for an average of $20M today.

The San Remo is renowned as the most celebrity infested building in NYC, home to Steve Martin, Steven Spielberg, Dustin Hoffman, Donna Karan and many others. Bono lives in the 6000 sq. foot 27th floor penthouse duplex in the north tower, which he bought from Steve Jobs. Atop the opposing tower resides Demi Moore, in the showplace she bought with Bruce Willis (who now lives elsewhere in the building). The San Remo’s coop board famously rejected Madonna’s coop application back in the 80’s. In the 2004 election, the largest donors to John Kerry’s campaign all lived in the San Remo.

Thanks to Farmboy Chris for providing the photo, which he took in January.