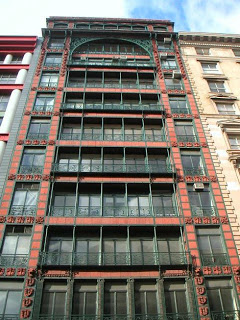 Built in 1902, the art nouveau Little Singer Building on Broadway in Soho, where Singer sewing machines were built, was converted to retail, artist and loft spaces in 1979. The 41-story Singer Tower, built nearby in 1908, was for a short time the tallest building in the world, but was demolished in 1968, making it the tallest building in the world ever “legitimately” destroyed. Both were designed by Ernest Flagg, who also designed the Naval Academy (it’s all-Navy week on JMG!) The L-shaped Little Singer has nearly identical facings on both Broadway and Prince Street.