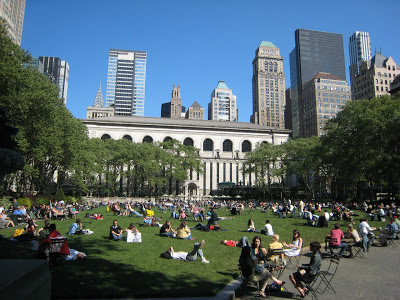 Bryant Park is a neat little 9-acre park squeezed behind the Main Library at 5th Avenue & 42nd Street. While an official NYC park, Bryant Park is managed by a private non-profit group. During the civil war, Union soldiers drilled there. Fashion Week takes over the park twice a year and during warm weather I’ve seen some great 8AM concerts (Prince, Pink) on the way to work, via Good Morning America. The Bank of America Tower (soon to be the city’s second tallest building) is being built at the northwest corner of the park, but unlike the boys in the West Village, the new tower is not expected to throw shade.