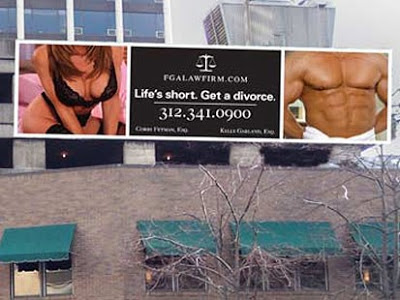 Life Is Short. Get A Divorce. Message: Why stay with that old hag of yours with hotties like THIS is the world? The above billboard from a Chicago law firm is causing national news, with even an association of divorce lawyers calling it “grotesque, undignified, and offensive.” (Because divorce lawyers are such a tender, easily offended bunch.) Whatever you think about the billboard, you have to hand it to its creators, who are facing professional sanctions for “conducting unbecoming” or some such nonsense. Incidentally, the law firm here is headed by a woman and that’s her personal trainer’s torso on the right.