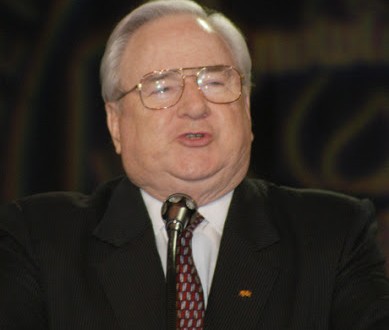 Jerry Falwell has died after being found unconscious in his office this morning. I will shed no tears. In fact, Tinky Winky and I may just have a big hug.

“Instant death is my punishment to Jerry Falwell” – God.

UPDATE: I can’t resist adding some classics from Falwell…

– “If you’re not a born-again Christian, you’re a failure as a human being.”
– “I hope I live to see the day when, as in the early days of our country, we won’t have any public schools. The churches will have taken them over again and Christians will be running them. What a happy day that will be!”
– “Grown men should not be having sex with prostitutes unless they are married to them.”
– “There is no separation of church and state. Modern US Supreme Courts have raped the Constitution and raped the Christian faith and raped the churches by misinterpreting what the Founders had in mind in the First Amendment to the Constitution.”
– “AIDS is the wrath of a just God against homosexuals. To oppose it would be like an Israelite jumping in the Red Sea to save one of Pharaoh’s charioteers.”
– “Textbooks are Soviet propaganda.”
– “The whole (global warming) thing is created to destroy America’s free enterprise system and our economic stability.”
– “(9/11 is the result of) throwing God out of the public square, out of the schools, the abortionists have got to bear some burden for this because God will not be mocked and when we destroy 40 million little innocent babies, we make God mad…I really believe that the pagans and the abortionists and the feminists and the gays and the lesbians who are actively trying to make that an alternative lifestyle, the ACLU, People for the American Way, all of them who try to secularize America…I point the thing in their face and say you helped this happen.”

UPDATE III: San Francisco is staging an “anti-memorial” at 5pm today, at the corner of Castro & 18th Street.