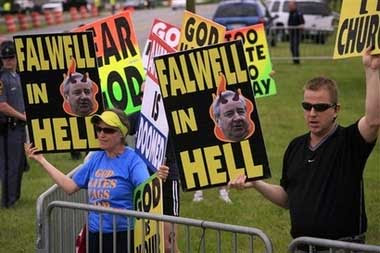 A Liberty University student was arrested at Jerry Falwell’s funeral yesterday after police were tipped off by his family that he had brought bombs that he intended to throw at the Westboro contingent that was protesting at the event. The bombs were described as a soda-can sized “sort of napalm”. Man, the gentle loving people of the Lord are ready to kill each other over who can hate more. (Photo via – Towleroad.)

Previous PlanetOut Tumbles
Next The Fleet Is In