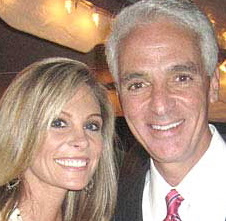 Florida Governor Charlie “Closet” Crist has grown a beard and her name is Kelly. Yesterday they made their relationship known to the St. Petersburg Times, who gushed, “She’s blond. She’s tan. She’s a mother of two, a former beauty queen who auditioned for NBC’s Fear Factor by eating a live earthworm and hiding four lizards in her mouth.”

During his election campaign Crist was dogged by persistent news stories about his gayness, including one that he’d had an affair with the 21-year old assistant of evil shrew Katherine Harris. Crist, who campaigned on a platform that included opposition to gay marriage, was quoted as saying, “Marriage is a sacred relationship. Like I had, before I got divorced.” After he was elected, Crist softened his stance on gay marriage, saying that the state Republican party had better things to spend their money on.

Yesterday, Crist signed a bill moving Florida’s election primary to January 29th, leaping ahead of the other traditional early primary states. Both parties have threatened to penalize Florida by removing half of their conventional delegates as Crist’s move could force them to dramatically redraw their strategies. Florida’s diverse and large population makes it a bellwether primary state and any candidate that did poorly in their new early primary would likely not survive to the next round. The bill also stipulates that all Florida voting machines must now provide a paper record of the votes.

As for Miss Kelly, I’ll quote Andy Towle, “We wish her the best with his realness.”
.

Previous Spinning Right Round
Next GB:NYC 4