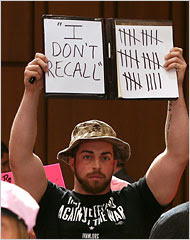 Remember Cpl. Adam Kokesh, USMC? Last month I blogged about the sexy Iraq war veteran, photographed here at the Alberto Gonzales hearings. Because of his anti-war protests, Kokesh is now facing a revocation of his honorable discharge from the Marine Corps and a discharge from the Individual Ready Reserves.

On June 4th, Kokesh will face a military tribunal in Kansas City who will hear charges that he disgraced his uniform by wearing a “stripped-down” version in his numerous protest appearances and that he later “disrespected” an officer investigating the uniform charge. Kokesh says the he loves the Marine Corps but, “As we waste our time on such petty issues, our fellow Marines continue to die in futility.”