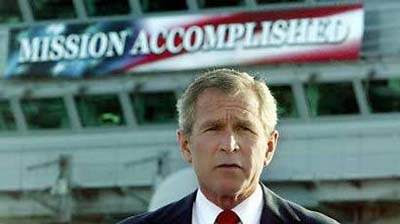 Today is the anniverary of one of the stupidest and most contrived political stunts in American history and the Democratic candidates are not missing the opportunity to comment on it.

Barack Obama: “Four years after President Bush landed on an aircraft carrier and declared ‘Mission Accomplished,’ we are still in a war where more than one hundred American service members have died in just the month of April. We grieve for them today and urge the President to avoid making another tragic mistake by signing the bill that will end this war and bring our troops home.”

John Edwards: “Four years ago, President Bush flew onto the deck of the U.S.S. Lincoln under a ‘Mission Accomplished’ banner to declare victory in Iraq, but all the photo ops in the world can’t hide the truth – his disastrous mismanagement of the war has left our troops in harm’s way and made Iraq a breeding ground for terrorists.”

As of yesterday, the death toll for American soldiers in Iraq is at 3351. The number of wounded and maimed is over 24,000. The toll for Iraqis is literally immeasurable. And tomorrow the president will likely veto the bill to set a timetable for withdrawal.

I am ashamed to be an American.
.

Previous Your Love Is A Tease
Next Tabloid Trash