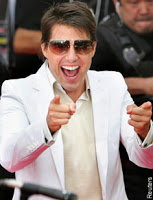 Show Him The Money And moving to News Of The Deranged, Tom Cruise is coming to Manhattan next week to host a $100,000 per table fundraiser to benefit a Scientology “New York Rescue Workers Detoxification Project”, which claims to be able to detoxify cops, firefighters and rescue workers who were exposed to poisons during the World Trade Center rescue. Crazy, right? Even crazier, this bullshit hocus-pocus act has been given hundreds of thousands of dollars by the city, even though experts call the project “medical mumbo-jumbo”. Some rescue workers are onboard for the procedure, which involves large doses of niacin and sitting in a sauna for up to five hours, which doctors warn can be very dangerous.

Previous Fairies Can Tie The Knot At Disney
Next Victory Dances