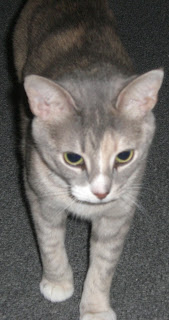 I swear that JMG is not going become a cat blog (not that there’s anything wrong with that), but since there was such an interest in yesterday’s post, I thought I’d give y’all an update.

Last night Shelter Kitty slept on the sofa instead of under the bed, which is pleasingly rapid progress, yes? She’s still very quiet, I haven’t heard her meow once, but she does chirp and purr loudly. I put a comforter on the windowsill and she’s been hopping up there to look out at the rain, in between manic gallops from one end of the apartment to the other. I do notice that if I approach her bowl she will rush over to eat, as if she’s used to having her food removed. But best of all, she comes when I call her or snap my fingers.

The APSCA’s vet called this morning and gave me a rather lengthy and informational instruction about FIV, telling me that Shelter Kitty’s diminutive stature could be because of her positive status. (Hey, I could do a Paris Hilton and carry her around in a murse, since she’s about the size of a chihuahua!) I also learned that some cats “clear” the virus on their own, but that mine probably won’t, because she’s tested positive three separate times over the last year. There’s more than a good chance she’ll live a healthy, normal lifespan, but I should especially vigilant to respiratory infections and make sure she not be vaccinated again, as the shot can sometimes trigger the virus into action.

I cannot praise the people at the Manhattan ASPCA more highly. From their vet to their adoption staff to their volunteers, everyone I’ve dealt with have been absolutely brilliant. It goes without saying that I urge you to use the ASPCA or a no-kill shelter if you are looking to adopt. Paying hundreds or even thousands of dollars for a pure-bred animal versus the APSCA’s very modest $75 fee (which includes spaying, shots, microchip, and more) is just appalling. And by the way, when I mentioned “Sanjaya” as a possible name, the vet screamed.