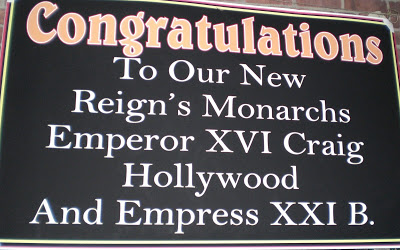 Yesterday I had a fun lunch with Matt Foreman and his partner, during which Matt told me about having attended the previous night’s Night Of 1000 Gowns, and we chatted about the similarities between the Imperial Court and International Mr. Leather pageants. Later in the afternoon, I arrived at the Dugout to find an Imperial Court victory party in progress. Bears, empresses and mayhem ensued. However, I’m still scratching my head over this banner.