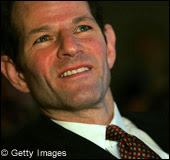 New York Governor Elliot Spitzer has announced that he will not march in tomorrow’s NYC St. Patrick’s Day Parade, the first NY governor to skip the parade in over a decade. Although Spitzer doesn’t specifically cite the parade’s ban on gays as his reason, his refusal to participate is consistent with his vigorous support of LGBT rights. Spitzer has promised to introduced legislation this year that will make gay marriage a reality in New York State.

RELATED: The group Irish Queers is planning a protest at the parade at Fifth Avenue & 58th Street at 10:30AM. That’s conveniently near Bloomie’s so I hope to see lots of us there! Protest, shop, brunch. It will be the gayest Saturday ever!
.