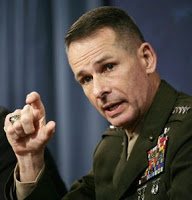 “I believe homosexual acts between two individuals are immoral and that we should not condone immoral acts.” – Chairman of the Joint Chiefs of Staff General Peter Pace, adding that he supports DADT. Pace went on to say that no Marine should have a cock bigger than his own (shown), effectively ruling out Matt Sanchez.

UPDATE: The Servicemembers Legal Defense Network is demanding an apology from Pace.

UPDATE II: Pace has expressed his regret, but not apologized, for his statement, saying he should have restricted his remarks to official government policy, rather than personal views. (HT: JMG reader Winston.)
.