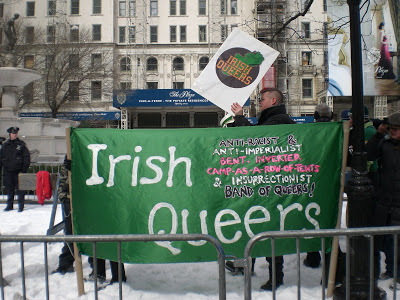 ABOVE: Irish Queers member JF Mulligan sets up. (Embiggen to read the banner.)

Forget “Erin Go Bragh”, the real chant of today’s NYC St. Patrick’s Day Parade was “Queers can march in Dublin! Queers can march in Cork! Why can’t queers march in New York?” Or at least that was the favored chant in the Queer Corral, which is what the Farmboyz and I dubbed the fenced-in “official protesters” area on 5th Avenue in front of the Plaza Hotel, where the Irish Queers contingent was assigned. Our neighbors in protester jail were a group of very supportive artists protesting the parade’s ban on whimsical costumes, such as leprechauns. (Thousands of men marched by in skirts, but no whimsical costumes are allowed?) Protesting for the 16th year, today’s Irish Queers action also supported a broad menu of progressive causes, including the anti-war movement, the Sean Bell case, and immigration reform. This lead to some rather clunky although spiritedly delivered chants, one of which was so weakly rhymed that Farmboy C told me it offended his sense of meter. (“The cops murdered Sean! Homophobia is wrong!”)

Yesterday’s mini-blizzard dumped half a foot of snow on Manhattan, surely diminishing parade attendance. And after almost three hours of standing in ankle-deep slush, I had lost the feeling in my feet. But happily, the energy level in the Queer Corral was kept high by the Rude Mechanical Orchestra, NYC’s “radical marching band” that lends musical accompaniment to many protests around town. The Farmboyz and I particularly enjoyed their marching band versions of Beyonce’s Crazy In Love and Salt-N-Pepa’s Push It. Ooh, baby, baby. I paid close attention to the parade participants as they passed the Irish Queers. The children in the parade were just bewildered by all the shouting. The folks in the several large groups visiting from various Irish counties seemed to be largely supportive, many of them waved, smiled and took pictures. The bagpipe brigades and marching bands hardly allowed their eyes to slide over to our side of the street, although a couple of the drummers gave us the finger and shouted, “Go home!”

The parade’s organizers, the Ancient Order of Hibernians, moved by with grim faces as the Irish Queers shouted “Shame! Shame!” Mayor Bloomberg and Rudy Giuliani (marching separately, interestingly) did not give us so much as a wave. And the thousands of marching cops seemed too busy flirting with the hula-hooping cute girl in the artists’ contingent next door to give much notice to us. I guess they didn’t notice her sign. ABOVE: The highlight of the day was when an Irish woman marching with County Kerry spotted the sign on the right and rushed over to the barricades to shout with a smile, “YES! He WOULD!” It was a wonderful moment. BELOW: From Cup Of Joe, a sign which once was posted in most NYC establishments, something the AOH seems to have conveniently forgotten.

Previous From Boys To Men Gets Lambda Nom
Next March Gayness