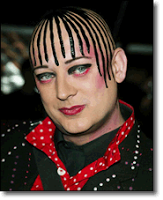 “I do think it’s shocking that somebody who has made so much money out of gay people is now part of an organisation which is anti-gay.” – Boy George, speaking against Madonna and her relationship with Kabbalah, about which he says, “I have investigated it and they are homophobic.” (YouTube.) In the past, George has called Madonna “a vile, hideous, horrible human being with no redeeming qualities”.