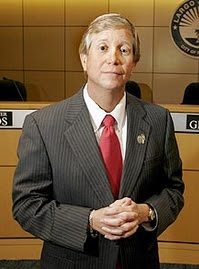 Largo, Florida, population 76,000, a Gulf Coast town near St.Petersburg, has decided to fire their city manager rather than allow him to transition to a woman. Steve Stanton, 48 and a married father of one, appeared before 500 people at a town meeting listening to residents like Pastor Ron Saunders say, ”If Jesus was here tonight, I can guarantee you he’d want him terminated. Make no mistake about it.”

In Florida, one can be fired for being gay or transgendered, unless local ordinances prevent it. There is no such protection in Largo, whose ironic slogan is “The City Of Progress.” (See update below.)

The Stanton case is perfect example of the need to press for the passing of ENDA now. Please consider signing an online petition supporting Stanton, for presentation to the Largo city commission. Write letters of complaint to Largo here.

UPDATE: A Florida reader points out that Largo DOES in fact prohibit sexual orientation and gender identity discrimination, but has decided to ignore their own rules. Thanks to this guy for the update!
.

Previous Nail Bomber Gets 50
Next The Tudors