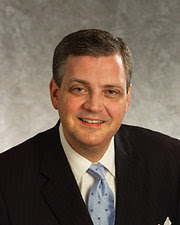 Slowly, some evangelicals are coming around to the belief that homosexuality is largely biology-based. However, Rev. Albert Mohler, leader of the Southern Baptist Theological Seminary, believes that there’s still a way to “fix” the problem.

In a statement posted on his blog, Mohler advocates for advancing the study of ways to prenatally redirect the development of potentially homosexual fetuses, saying, “If a biological basis is found, and if a prenatal test is then developed, and if a successful treatment to reverse the sexual orientation to heterosexual is ever developed, we would support its use as we should unapologetically support the use of any appropriate means to avoid sexual temptation and the inevitable effects of sin.”
Read the rest here, it’s fascinating stuff, full of condemnation for homosexual “behavior”, with a kind word for those us of doomed to enternal damnation because it’s God’s punishment for man’s “fall”. To Mohler, it’s not our fault that we’re dirty cocksuckers, God is punishing all of mankind by inflicting dirty gay babies that grow up to be porn stars. It’s original sin, manifested as hairdressers and the LPGA.
Queer Sighted’s Richard Rothstein has a typically brilliant reaction called Genetic Cleansing Of Original Sin. Mohler actually has a coherent thought or two in his essay, and later on his blog he even comes out against Ann Coulter for her CPAC comments. But calling for the better treatment of existing gays while calling for a way to prevent future homos from being born doesn’t win him a pass. Christians still want to change us, they’ve just decided they need to start earlier.
.
Share