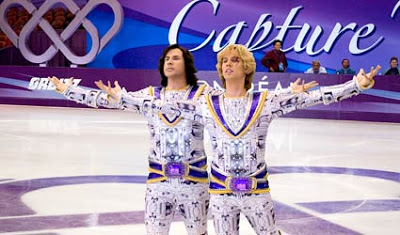 Last night Aaron and I attended a preview of Blades Of Glory, starring Will Ferrell and Jon (Napoleon Dynamite) Heder. Will Farrell plays the same character we saw in Anchorman, a deluded megalomaniacal ladies man, who along with Heder is banned from men’s figure skating after a gold medal ceremony fistfight. Thanks to a loophole pointed out by Heder’s creepy gay stalker, the two champions return to competitive skating as the sport’s first-ever same-sex pairs skaters.

While Aaron enjoyed the flick as an allegory for America’s discomfort with male couples, I grew increasingly annoyed and bored with the film’s one-note joke premise. “Ew! He’s totally holding that guy by the butt!” “Ewwwww, his balls are totally in his face!” “Ha, ha! The blond has to skate as the girl!” Ferrell and Heder rolled their eyes and curled their lips in disgust at every touch. After the film, Aaron and I stood in the lobby with the Manhattan Offender and Josh & Josh trying to decide if what we’d seen was homophobic. I was in the minority, the other guys just thought it was typical gross-out the audience humor. However, when that gross-out point is the act of two men touching, what else could it be but homophobia?

I do have to give props to the who’s-who of figure skating who lent cameos to the movie: Peggy Fleming, Sacha Cohen, Brian Boitano, Nancy Kerrigan and Dorothy Hamill, even though the film relentlessly skewered the sports’ over-the-top costumes and drama. Scott Hamilton was quite good as an announcer given to bad metaphors. And the camera trickery made it look like Ferrell and Heder were indeed performing.

Aside from the stalker character, gay men are noticeably absent from this movie, rather odd, yes? Heck, my own ex is at this moment in Tokyo with his boyfriends, attending the world figure skating finals. However, eagle-eyed Aaron spotted what may have been a deleted sub-plot when he noticed that a stained-glass window in the ski-lodge of Ferrell & Heber’s coach (played by Craig T. Nelson) that seemed to depict Nelson and his choreographer in an embrace, wearing matching shirts with a red heart. This movie will be bullet-proof to reviews, the preview audience applauded at the end. As for me, meh.
.