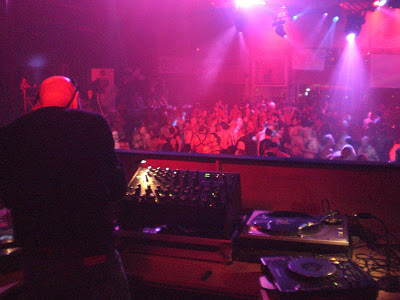 BELOW: DJ Michael Fierman leans over his record as he sooths the morning masses shortly after taking the Black Party stage at 11AM. Notice that unlike the preceding two DJs, Fierman is using vinyl. That’s Bonnie Pointer’s Heaven Must Have Sent You on the turntable. Another Black Party has come and gone, always with an astonishment of how quickly time passes inside the Roseland Ballroom. “2pm? It’s not 2pm! That’s crazy talk. Stop that crazy talk you crazy bottom!” This year’s production ran much more smoothly than last year’s. I arrived at 2am to find no real line at the box office or will call window. My backpack was quickly inspected and without even the traditional cursory circuit party pat down, I was inside. Even more amazingly, there was only a very short line at the coat check, all the windows were staffed and I checked my coat in under 3 minutes, a far cry from last year’s almost 90-minute door-to-dance floor ordeal. On the main floor we found yet another leap forward in nightclub technology: air conditioning! It was actually quite comfortable on the dance floor, despite the body heat of 5000 men.

I arrived on the main floor as DJ Michael Marx cued up The Bird And The Bee’s Would You Be My Fucking Boyfriend and it seemed for a moment that this would be another in an almost unbroken string of great Black Party nights. Yet, despite dramatic operational improvements, over the evening there proved to be a prevailing sense from those I spoke to that this year’s event never quite reached critical mass. We never really got to that “we’re all here together” place. No one could quite put their finger on why, exactly. A few I spoke to actually blamed the pleasant temperature, saying that in order for the energy to rise, so must the heat. I think there’s something to that. Others criticized the murkily-understood NASCAR theme of the party. Banners ringing the dance floor limply leather-mocked NASCAR’s corporate sponsors. Logos spotted: Fist Union, STD, Daring Queen, Dick In A Box, Penis Oil. It wasn’t until near the end of the party that it was pointed out to me that the text inserted on the banners between the logos could be read as one continuous sentence that wrapped around the room: “You can tell the ideals of a nation by its advertisements.” That’s Norman Douglas.

DJ Tony Moran took over the “turntables” at 4am, then delivered an interesting, if overlong, reworking of Ofra Haza’s house classic Im Nin’alu. Man, I loved that track. The sample/remix thingy, not so much. Moran then proceded to skip through the Now That’s What I Call Circuit! Best Of 90’s Edition: Jam & Spoon’s Right In The Night, Luminaire’s Flower Duet (second only to Yoko Ono’s Unfinished Music #1 as the most annoying record ever made) and Nalin & Kane’s Beachball. He also played the disco version of the Brokeback Mountain theme song. I am completely serious about that.

Before you lend too much weight to the above bitchery, I must stress that the dance floor suffered not one moment of being less than wall-to-jockstrap packed with the menz. There was a very high beauty/grizzly quotient on hand this year, keeping the crowd race-walking the sidelines and balconies, to make sure that nobody missed getting a look at their asses. Among the celebs I spotted were a wobbly Rupert Everett, Pulitzer-winner Michael Cunningham (The Hours), Andrew Sullivan, and some others best not named here. That’s Gawker’s job. Speaking of which, the Manhattan Offender arrived with a Gawker/Fleshbot film crew at 10am to conduct interviews with wide-eyed departing leatheristas. Be afraid. A personal highlight of the party was meeting National Gay & Lesbian Task Force head Matt Foreman (pictured left with realtor-to-the-stars Joe Bongionvanni) and Foreman’s charming partner, with whom I bonded over our mutual Southern roots. Also making the scene was Provincetown bon vivant Scott Hayes, spotted glad-handing porn stars and Broadway divas with equal aplomb. A special surprise was colliding with loyal JMG commenter Freddy In PTown, whose simple-yet-effective jockstrap/boots ensemble turned a few heads so hard, I think I heard bones crack. Freddy is as delightful in person as he is here on JMG and I’ve got the PG-13 photos to prove it. I also met lots of great guys that read this here website thingy, thanks all of you for your kind words.

As longtime readers know, I sort of live for the final portion of the Black Party, and DJ Michael Fierman was reliable once again, opening with Depeche Mode’s Black Celebration, his signature opening number. The next four hours of disco biscuits are tough to cherry pick for titles, but I particularly enjoyed hearing Boris Midney, Marlena Shaw’s required-by-law-Saint-classic-so-Michael-had-to-play-it, Touch Me In The Morning, and Donna Summer’s MacArthur Park Suite. Finally, around 3pm, Fierman finished his encore with Diana Ross’ Ain’t No Mountain High Enough, and we, the two hundred or so remaining, filed slowly for the coatcheck, arms around each other. This year’s Black Party was a low point in this century’s Saint history, but do not doubt that I will be back next year. UPDATE: I forgot to mention that for the first time in memory, none of my group witnessed any patrons in drug-related distress. Wahoo, my people! In fact, I almost took a picture of Roseland’s hired paramedics sleeping in their ambulance parked behind the venue.

BELOW: Christian, of New York Boys Of Leather steps outside the Roseland at 1PM for a smoke break. Passing Hasidim were unfazed by the codpieces and chain mail jocks. On the far right, you can see the Hello Deli, well-known to Letterman viewers. Previous Morning View – McDonalds
Next Dancing With The Boys