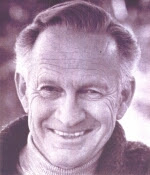 I guess the word was a little slow getting out, but Walker Edmiston, one of the most familiar cartoon voices of my childhood, died two weeks ago at age 81. Most of you will know Edmiston as the voice of the Keebler Elf, but I also remember him as a Sleestak on Land Of The Lost, Big Daddy Ooze on Sigmund And The Sea Monsters, Dr. Blinkey on H.R. Pufnstuf and most of all, as the voice of tiny voodoo doll that terrorized Karen Black in Trilogy Of Terror. Edmiston also did tons of regular acting work, but his voice as unforgettable. As an 8-year old before Al Gore invented the internet, I was still very sure that I was hearing the same guy on all my shows, but I could never prove it.