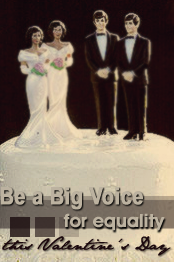 Valentine’s Day With The Big Voice I was all set to write a post encouraging attendance at The Big Voice, the critically-raved off-Broadway musical about, written by and starring two gay men in a 22-year relationship. This is the slow time of year for theatre attendance and when the shows with less than packed houses tend to fold. Then I got the following press release:

Dozens of same sex couples will proudly celebrate their commitment to each other in a public demonstration of their devotion, loyalty and love after the 8pm performance of The Big Voice onstage at the theater. February 11th thru 17th is Freedom to Marry Week in the United States.

Join Rabbi Jill Hausman and THE BIG VOICE stars Jim Brochu and Steve Schalchlin, who have lived together as a couple for 22 years, as they bear witness to a miracle on 47th Street. Rabbi Hausman and Jim Brouchu, who is also ordained, will conduct the inter-denominational ceremony.

Rabbi Hausman commented, “I welcome all couples to The Actors Temple, Congregation Ezrath Israel, who together wish to present themselves for an interfaith ceremony of commitment. We invite those who want their union to be blessed in dignity and love, in acceptance and respect, and as a recognition of their intention to live together in the community as a married couple.”

If you’ve been putting off seeing The Big Voice, you’ve got no excuse to wait any longer.
.

Previous Weekend Links
Next No Kiddies = No Marriage For You!