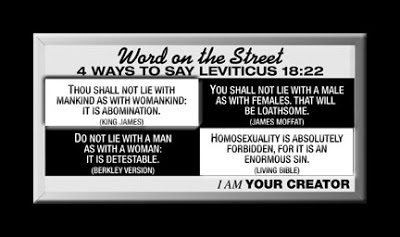 Supes Won’t Hear Of It KeyWord Ministries lost its last bid to repost its anti-gay billboard in Staten Island yesterday, when the U.S. Supreme Court refused to hear the case. The signs, which went up briefly in 2000, quoted everybody’s favorite Leviticus passage in four different ways, and were removed by the sign company after the borough ruled that the sign was “essentially hate speech”, and served no purpose. Nigerian-born Pastor Kristopher Okwedy then launched a long-running freedom of speech lawsuit against the city, supported by the American Family Assocation.
.