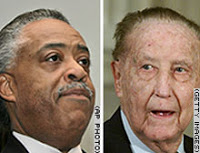 Reseachers at Ancestry.com have uncovered proof that political gadfly and relentless muckraiser Al Shapton is a descendant of a slave owned by the family of late Sen. Strom Thurmond, one of the most rabid foes of desegregation and civil rights. After his death, it was revealed that Thurmond had fathered a biracial child with his family’s housekeeper. Sharpton calls this latest revelation the most “shocking” news of his life. Thurmond was the second-longest serving senator in U.S. history, at almost 48 years. Sharpton has been irritating New Yorkers since dinosaurs ruled the earth.