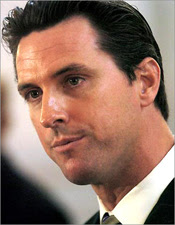 Newsom Fucks Up (And Around) San Francisco Mayor Gavin Newson, the darling of some gay marriage activists, has been exposed for having an affair with the wife of his election campaign manager. Newsom is up for re-election this year and faces a grassroots campaign urging openly lesbian state Sen. Carole Migden to run against him.

Not all gay marriage proponents are Newsom fans. Some activists working on the issue have been critical of Newsom’s February 2004 unilateral declaration that gay marriages would be legal in San Francisco, calling the move “political grandstanding” and ultimately detrimental to the cause. The marriages that took place in San Francisco were later ruled invalid.

Gay marriage activists that had been doing the tedious legislative groundwork towards legalization suddenly found the rug pulled out from under them, as Newsom’s spotlight-grabbing tactic eroded the then slowly improving climate for approval. Others (myself included) suspected at the time that Newsom could even be covertly working for the Republicans. Obviously, this new scandal will increase the call for Sen. Migden to oppose Newsom this fall.

Previous Hairy Potter Googlebomb
Next I Will Hold You Ten Times