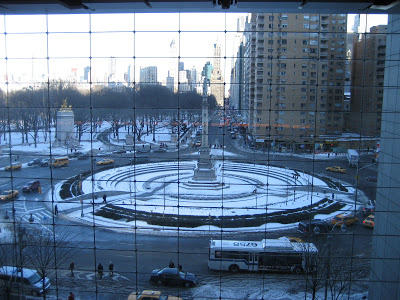 The monument in the middle of the circle was erected in 1892 to celebrate the 400th anniversary of Columbus “discovering” America. It is the the point from which map makers measure the distance from New York City. A couple of years ago, the fountains that surround the column were renovated by the same team that did the fountains at the Bellagio in Las Vegas, with surprising lovely and understated results. This picture was taken yesterday afternoon from inside the Time-Warner Center. Embiggen to make pretty.