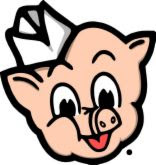 “I Will Fucking Destroy You” I had a rather strange encounter at the Eagle last night. I was wearing the Piggly Wiggly t-shirt that my buddy Little Tom bought me when he visited San Francisco for Mac World last month. Tom and I were leaning on the pool table under the big screen playing the Super Bowl when a guy a pointed at me and made a strange face. Tom said, “Who’s that?” I was about to say “No idea” when the guy marched over and demanded, “What’s up with that shirt, dude?” I said, “It’s a grocery store chain in the south.” He said, “I know THAT. My name is John and I’m from New York City and I will fucking DESTROY you!” Tom backed away nervously. I said, “Um, OK. My name is Joe.” The guy grabbed my hand and gave me one of those macho shithead bone-crushing handshakes. “Your name is Joe? That’s all you GOT?” And then he went back to his friends. Strange, strange, strange. But now we have a new catchphrase.
.