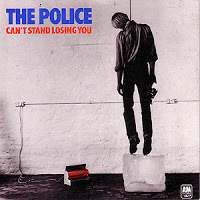 The Police are reuniting after 23 years to perform at the Grammys. I am unreasonably pleased by this. Back in 1978, I considered that I had personally discovered The Police, plucking the 45 single for Can’t Stand Losing You / Dead End Job out of the import bin at Orlando’s Record City. I was drawn in by the photo of Stewart Copeland hanging with a rope around his neck, a space heater slowing melting the ice he was standing on. That blew my 19-year old mind.

I’ll admit that the loping reggae of the A-side Can’t Stand Losing You was disappointing to my punk-obsessed self, but the full-on punkness of the B-side Dead End Job made me pick up Outlandos d’Amour when it followed a month later, and I was hooked. (Trivia: Police Brutality was the original title for the first album.) I saw The Police in concert for the first time that fall at Great Southern Music Hall for $8 and I still have the ticket. They had such a small reportoire back then, for their encore they had to perform Roxanne a second time. The Grammys are February 11th.
.

Previous Death Bowl
Next It Must Be IRS Day