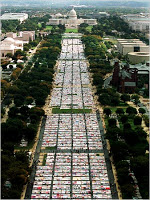 Has The Quilt Run Its Course? There’s an interesting story about the AIDS Memorial Quilt in today’s New York Times that speculates on the enduring value of the quilt in a day when its message may have “lost its punch”. The quilt’s caretaker organization, the Names Project, has been mired in infighting and lawsuits for years now and the bulk of the quilt is slowly deteriorating in storage in Atlanta.

The current size of the quilt is six city blocks, several times larger than its last complete public display in 1996 (pictured), which my friends and I flew from Florida and California to attend. Protease inhibitors had just become available and even while walking those hallowed rows of grave-sized panels, there was a palpable sense of optimism in the air.

When I lived in Fort Lauderdale, my boss was the chair of the Florida chapter of the Names Project and he was always shuttling around the state from one display to another. At these displays there were usually donation jars set up, so that visitors could contribute to the costs of storing and shipping the panels, no small amount when the number of panels in a single display could number in the hundreds. My boss would bring the donation jars into the office so that our accountant could count up and bind the cash and checks for deposit.

After a well-attended exhibition at the Palm Beach County Jewish Senior Center, the visitors had been particularly generous and as it was late in the day, I offered to help the accountant count the donations. Looking across a pile of money, Jon stared at me for a second and said, “OK, I’ll do the cash. Why don’t you do the checks?” He pushed a large pile of personal checks at me. I gathered them up and returned to my desk with the donors register, which the Names Project used to record the names and addresses of contributors.

As I began the laborious process of recording the names, addresses and amounts, I couldn’t help noticing the memo line on one of the checks. “For my son, Adam.” The check was for $20. My throat clenched up. The next check: “I miss my Ronnie.” $10. A couple of checks later: “For my grandson, Michael.” $25. I turned on the radio and tried to become more mechanical in my movements. Name, address, amount. Name, address, amount. But I kept finding my eyes returning to the memo line. I couldn’t stop myself. “In the name of Ben Johnson, our son.” “Daniel Berg. 1965-1995.” And on and on.

I only got about 50 of the 200 or so checks recorded, when I came across this notation: “Mama misses you so much.” $10. I slammed the register shut, put the checks on top, and walked back the accountant’s office. I pushed the door open and said, “Jon, um…listen, I’m sorry but I can’t finish this right now. I’ll get to it in the morning, cool?” Jon looked over the top of his glasses at my red, watery eyes and gave me a slow, understanding nod, “Yeah, sure Joe.” I turned to walk out and he added, “Why do you think I said I’d do the cash?”

The AIDS Quilt is the most powerful memorial in the history of gay culture. If it has “lost its punch”, I really don’t know if that’s a good or bad thing.

BOTTOM RIGHT: My former boss’ quilt for his father, Dr.Valeriano Suarez. Sewn to the quilt is a teddy bear wearing surgical scrubs.