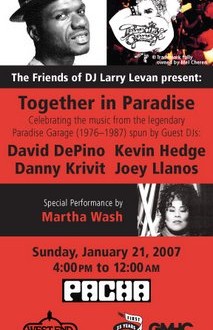 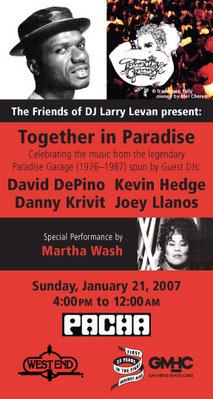 REMINDER: A tribute party to the Paradise Garage’s DJ Larry Levan will take place Sunday, January 21st at Pacha in Hell’s Kitchen. The party benefits Gay Men’s Health Crisis. Martha Wash will perform and the DJs include Danny Krivit of Body & Soul. Tickets are $35 , but only $15 if you still have your old Paradise Garage ID! Levan, who died of a heart ailment in 1992, spent ten years at the helm of NYC’s Paradise Garage and was one of the most influential DJs of the house music era.
.

Previous Total Gay Overload
Next But No Gareth Gates