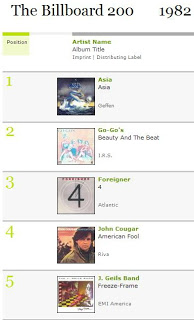 Since we’re on an oldies roll today, here are the Top 5 albums of 25 years ago and my foggy memories thereof.

2. Go-Go’s – Beauty And The Beat. Critical darlings and homo favorites, Go-Go’s would implode after only three albums, but it was a sweet ride while it lasted. Beauty produced the 1981 hits We Got The Beat (#2 US) and Our Lips Are Sealed (#20 US, #47 UK). It was the first album that was written and performed by an all-girl band to reach #1. (Who else has done this?) Every white girl in the country copied Belinda’s dance. (Also: gay men.)

3. Foreigner – 4. I was not and remain no fan of the sort of colorless stud-rock of the time, which Foreigner personified. That said, “4” produced a couple of great singles: Urgent (#4 US, #47 UK) and Waiting For A Girl Like You (#2 US, #8 UK). I used Waiting in my slow-dance set back when I was a baby DJ.

4. John Cougar – American Fool. His last pre-Mellencamp release, I remember buying this album to satisfy a rockist boyfriend of the time. I think my copy hit the dustbin about 20 seconds after the boyfriend did. The album contained the bearable Hurt So Good and the unforgivable Jack And Diane. Here’s a little ditty ’bout – oh fuck. I apologize for reminding you of this. Sincerely.

5. J.Geils Band – Freeze-Frame. This album actually got a lot of play in teh gay clubs. Flamethrower was a hit 12″ single (#12 Club Play). J. Geils will always be most remembered for the goofy paint-splattering video for Freeze-Frame (#4 US, #27 UK), and for Centerfold, which was the biggest hit of the band’s career (#1 US, #3 UK.) and which always sent me diving for the station buttons.

Tags music nothing better on tv