Big weekend. Big in every way.

Saturday: Up early and out for the Superbowl of gay rugby, the Bingham Cup. Emerging from the 6 train up in Harlem, Eddie and I ran into podcaster/tough guy Mike P and blogger hottie Bryce of Plastic Music, and we joined the curious mix of locals, ruggers and gay rugby groupies waiting in line for the Crazy Bus.

Ah, the Crazy Bus, aka the X65. You see kids, the Bingham Cup was held on the sprawling athletic fields of Randall’s Island, home to the largest mental institution in the world, the Manhattan Psychiatric Center. (Technically, the hospital is on Ward’s Island, but the two have been joined by landfill over the years.) Having ridden that bus out to Randall’s Island in years past to play homosexual softball, let me tell you…there are some very interesting characters on that bus. Take a dozen heroin addicts, some schizophrenics, a serial killer or three, then add 50 large hairy gay men. Interesting. You would have loved watching.

The rugby matches themselves were predictably hot, sweaty, violent, funny, and bloody. I’m still trying to wash my brain of the image of the guy getting his eyeball stitched up as I walked past the med tent. Eddie, Vasco and I hung out with Washington Renegade/superblogger Jimbo and he tried to explain the various rugby positions. I think Jimbo plays Wingback or Chickenwing or something like that. We also chatted with Renegade/blogger Seamus McStebbins and what is it with all ruggers being bloggers? At one point Vasco and I decided that all players wearing #13 were inexplicably super-hot. All of them. Especially you, Sydney Convicts #13. Especially you. And we missed seeing it, but blogger/glamour consultant Neil (husband of the above mentioned Bryce) scored his first goal ever for the Gotham Knights, then performed his ritual Zulu. Go Neil! Really sorry I didn’t get to watch.

Saturday night we met up with Glenn and Vasco and attended a couple of the team’s bar parties, both predictably rowdy and beer sodden, despite their relatively posh Chelsea locations. There was a lot of shouting and some rampant rugger-on-rugger hot man lovin. At least I got to watch.

Sunday night was the NYC debut of popular UK bear dance party XXL at Webster Hall, where we arrived to find the place already packed at 11:30pm. Webster Hall sucks as a nightclub venue. The main room is on the third floor, the bathrooms are in the basement, and I’m sure a lot of those very sore ruggers didn’t appreciate that. The very strange Webster Hall bartending set up, in which your order is taken, then ferried to some kind of master bartender, who actually rings you up, made it just impossible to get a drink in under 15 minutes. Just as well, at $7 a pop for a plastic cup of Budweiser.

But otherwise the party was great. Crowded, but not crowded. Bloggerati Robocub (and Robopapi) and Michael Hartney were tearing up the dancefloor. The music was well received, if a rather curious blend of recent hits (Hung Up-Madonna, Mary J. Blige – Be Without You) and early ’90s diva house anthems (Gonna Make You Sweat– C&C Music Factory, Ride On Time – Black Box). My personal highlight was Donna Summer’s I Feel Love, of course! Ultra Nate’ performed early, singing her gay pride anthem Free. Around 2:30am, Barbara Tucker took the stage with four backup singers and delivered one of the best club performances I think I’ve ever seen, performing her immortal Beautiful People and her 2004 hit Most Precious Love, among others. Perhaps sensing that her audience was a bit longer in the tooth than during her other nightclub appearances, Tucker revealed that she had just turned 44 years old, generating huge applause.

The biggest downside of the evening was coming across an unconscious young man in the seating area above the dancefloor. I tried to slap him awake to no avail and finally left in search of assistance, once I got the guys seated nearby to agree to keep him upright until I returned. I have a feeling the kid was simply passed out drunk, not OD’d on GHB, but you can’t be too careful these days. I encourage anybody who comes across someone in distress in a nightclub to be that person who goes for help. The first Webster Hall employee I found simply said, “Take me to him,” and that was the end of my involvement.

Otherwise, it was a great night and we’ll definitely attend another XXL, should the party return to NYC. We even got a free mix CD upon departure, which was a nice touch. And congratulations to the Bingham Cup winners, the Sydney Convicts who also won for overall hotness, not that I’m shallow or anything. 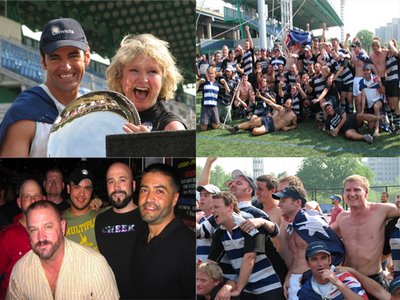 Share
Previous Brokeback Mounties
Next It’s Getting Hot In Herre